The Importance of Interview Feedback on Your Employer Brand 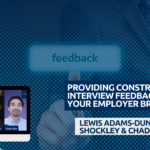 Chad: So I’ll actually ask you a question, Lewis, do you think this conversation topic is indicative of an area or an opportunity in the hiring space to maybe innovate around?

Lewis: I think so. I think, just because I find it such a frustrating topic for me, I do think the hiring processes could be sped up and businesses would save money if they were able to hire quicker and better talent, and it’s just communication. I don’t think that needs to be anything innovative or some kind of tool that needs to be created. People just need to talk. People need to set up communication lines internally and set expectations when hiring managers are interviewing. Whether that be a HR team, saying, OK, we’re going to have a round-up every Friday. We’re going to talk about all the candidates that interviewed And there’s no excuse that we’re going to sit down to talk about it. Unless you’re on PTO, this is part of your day-to-day. I don’t think we need to introduce anything kind of like ‘next gen’ that’s going to change the entire hiring process. People just need to communicate.

Abby: Do you sometimes see the breakdown, on the other side of the table, if there’s lots of people involved in the process? I think, Lewis, before we came on the show, I had talked to you about seeing panel interviews where you have 10 or 15 people interviewing one candidate. And then how do you aggregate all those ten people, what they think of you as an individual? They have to come together, sit down and talk. They have to talk to the hiring manager who is often not necessarily on that panel part. And then that has to go through HR and possibly their recruiters. So it’s not just managing what one person thinks, right? Sometimes you’re a pretty large group of people and how they all come together to share their thoughts.

Lewis: I think that’s really important to point out, because I don’t think enough people know about all of the little mechanics that go on behind closed doors. So I think it’s a really good point. I guess my question back is, do you really need 15 people on a panel to interview one person?

Abby: Yeah, I don’t know if, Chad, if you’ve ever been on a panel interview, I have to say, it’s pretty awkward and it’s really intimidating. It’s really stressful for the candidate. I think the more people you have from the company on the other side, like talking to somebody, the more stressful it is because you’re like, oh, God, am I saying something wrong? Like, I don’t know. That person made a funny face that other person did too. I think interviewing is just always stressful for that candidate because you’re putting yourself in a position to be judged. And, so, at the end of the day, the more people you have on the other side of the table, the more stressful you’re making that experience. And probably the less performance you’re getting someone to be like, the less you’re seeing who they really are.

Chad: Yeah. So I haven’t actually been in too many panel interviews, but the ones I have been in, I totally echo that sentiment. It is relatively uncomfortable when you have like three or four people staring into you and asking you questions. And I think the crux of this, it’s interesting, Lewis, that you’re pointing this out.
it’s almost a problem as old as staffing and recruiting to a certain extent, because it’s like, you know, sometimes for specific roles, you need multiple people. And those people are actually sort of assessing soft skills, which is very difficult to actually, like, tangibly articulate. What is it about this person? Versus if we just looked at their resume and said, OK, they have these hard skills and it says that they have this much amount of time and experience into them. So I guess until they come out with an A.I. solution to sort of aggregate all the data and synthesize the soft skills, it seems like this is still going to be a topic. But I think at the top of this discussion, to your point, it’s really how do we get people to talk more? What are the incentives behind that? And there was something really interesting. You mentioned, Abby, about the process, you know, even to get that feedback, because I wonder if there are just compliance or liability issues with directly communicating all that feedback to the people looking to get the job.