Why Hamburg is a great location for startups 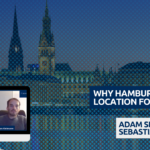 Adam Slade: When it came to choosing, not only what the product is, but where the product is going to be based, you founded it in Hamburg. What was the decision behind choosing Hamburg as the location that you would grow and build the business from scratch?

Sebastian Kielmann: So why Hamburg? Firstly, I lived in Hamburg. Secondly, because our biggest customer is in Hamburg, which is the OTO Group, and then 15 or 16 of our customers are out of the OTO Group, and are settled here in Hamburg. I also like the culture of Hamburg. It’s more family friendly than other startup cities, but that’s my own private opinion.

Adam Slade: We won’t hold you accountable for that… That ties me into my next point, when I’m speaking to developers and engineers outside of Germany that are potentially looking at moving into the country, Berlin always seems to be the default location. It’s, of course, a very well known start-up hub and has an international culture, but Hamburg is heading in that direction as well and we’re seeing more success stories come out of Hamburg as well.

Sebastien Kielmann: I guess, first of all, when all the start-up growth in Berlin began, prices were very low for an apartment. But they have exploded over the last year! So, Berlin isn’t a cheap city any more compared to Hamburg, Munich, Frankfurt or Cologne. Berlin has a very different culture compared to Hamburg. People are totally different there. And it’s also huge compared to Hamburg. So in Hamburg, you have everything that you have in Berlin, but the distance between one thing and another are shorter.
Hamburg is very, very green. So you have a lot of parks, you have a lot of green areas, and it’s not a long journey to get to the water. So I like to go kitesurfing, if you like to walk on the beach, Hamburg is very, very close to the sea when compared to Berlin, but there is one overarching difference between Hamburg and Berlin; they have a different startup mentality. If you’re in Berlin, you don’t have to speak German. If you’re in Berlin, you don’t have to fit in with the German culture; you’re in Berlin. If you’re in Hamburg, you would slowly start to get more acclimatised to the Northern German culture and, up to a certain point, you would have to gain more language experience. So if you’re looking to move to Germany, just want to work there and don’t want to have anything to do with the culture of the country, don’t want to learn the strange language they speak there, then you’re well suited to go to Berlin. If you want to go to Germany because you like the culture, and want to be a part of the cultural community there, then you’re more suited to Hamburg. You’ll learn that people here are very friendly; if they tell you something, they really mean it. If you like this type of culture, want to learn the language, integrate yourself and if you want to stay for a long time and build on the ‘family’ surroundings, then Hamburg is the city for you.

Adam Slade: Do you think, if someone was seriously considering moving to Hamburg, they would need to learn German to make that a long term base of operations? Or could an English speaker survive in the city?

Sebastien Kielmann: An English speaker would survive in the city. But you would feel better if, over a certain period of time, let’s say, over the next five years or so, started learning German, at least to a certain point, because it would make your life easier and could integrate better. So, I’m Brazilian ann I have friends in Berlin who came from Brazil and they live in like a ‘Brazilian bubble’ in Germany because they mostly speak Portuguese and sometimes English. They meet their Brazilian friends, they go to restaurants together. And there are even parties where only people from Brazil come attend So you’re in another country, living the culture of your country, which is OK, it’s fine. But if you’re in Hamburg, you’ll get more of a variety and you’ll get slowly introduced more and more into the Hamburg culture and less tempted to stick to what you’re already used to.